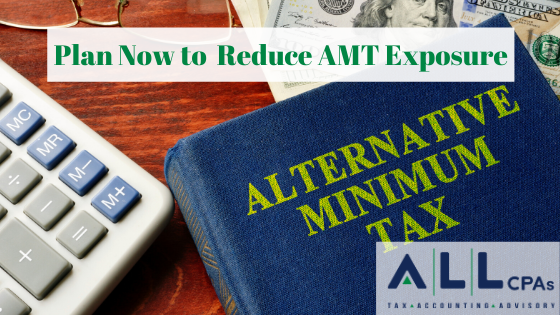 First the bad news: Despite passage of the Tax Cuts and Jobs Act (TCJA), the individual alternative minimum tax (AMT) is still in place. But there’s some good news: The law has made AMT rules more taxpayer-friendly for 2018 through 2025. In addition, other TCJA changes reduce the odds that you’ll owe the AMT for those years. Even so, you may still benefit from taking steps now to avoid or minimize it.

Your exemption is reduced by 25% of the excess of AMT income over the applicable phase-out threshold. But thanks to the TCJA’s much-higher thresholds for 2018 to 2025, only those with very high incomes will be affected by the phase-out rule. Middle-income taxpayers will benefit from full exemptions.

Several variables make it difficult to pinpoint exactly who will and who won’t be hit by the AMT under the new tax law. However, the TCJA reduces or eliminates the risk associated with some factors for 2018 through 2025, for example:

Substantial income. High income can cause your AMT exemption to be partially or completely phased out — which greatly increases the odds that you’ll owe the AMT. Although this risk factor still exists, it has been substantially diminished by the TCJA’s more-taxpayer-friendly AMT exemption rules.

Miscellaneous itemized deductions. In the past, deducting such items as investment expenses, fees for tax advice and preparation, and unreimbursed employee business expenses could raise the risk of AMT exposure. But for 2018-2025, the TCJA eliminates most miscellaneous itemized deductions for regular tax purposes. So this risk factor is gone for now.

But even following the passage of the TCJA, some factors continue to make taxpayers vulnerable to the AMT, including:

Exercise of ISOs. In-the-money incentive stock options (ISOs) feature a bargain element — the difference between the market value of the shares on the exercise date and the exercise price under the ISO. This bargain element doesn’t count as income under regular income tax rules but it does count as income according to the AMT. This risk factor still exists and will likely continue to be a common cause of AMT liabilities.

Depreciation write-offs. Traditionally, assets such as machinery, equipment, computers, furniture and fixtures from a business or from investments in S corporations, limited liability companies or partnerships were required to be depreciated over longer periods for AMT purposes. This increased the likelihood that you’d owe AMT. For both regular income tax and AMT purposes, businesses can now deduct the entire cost of many depreciable assets placed in service between September 28, 2017 and December 31, 2022 in Year 1. The TCJA thus reduces this risk factor for newly-acquired assets. However, if you’re depreciating older assets under the prior law’s rules, the depreciation write-off threat still exists.

Avoid or Minimize the Tax

As we explained above, the TCJA reduces the odds that you’ll owe the AMT. Even if you do owe it, you’ll probably owe less — possibly a lot less. Nevertheless, you might benefit from making some changes that will help reduce your exposure to the AMT. For example:

Some taxpayers are in the habit of prepaying state and local income and property taxes that are due early in the following year. These taxes aren’t deductible under AMT rules, and it may now make sense to deduct them next year when you have a chance of not being exposed to the AMT. Prepaying also may be a bad idea because the TCJA limits itemized deductions for state and local income and property taxes to a combined total of $10,000 ($5,000 for those married filing separately). Paying next year’s taxes this year might push you over the threshold for non-deductibility.

You should also be careful when exercising in-the-money ISOs. Triggering these options when there’s a big spread between current market value and exercise price is one of the most common causes for AMT liabilities. Consider spreading out ISO exercises over several years.

And although the interest on municipal bonds is tax-free under regular tax rules, interest on private activity bonds is taxable under AMT rules. In general, a private activity bond is a bond issued by or on behalf of local or state government to finance the project of a private user, such as a bond used to finance a stadium for a professional sports team.

Most other AMT adjustments and preferences are deferral preferences that potentially will generate AMT credits. For example, the bargain element from exercising an ISO is a deferral preference as are AMT depreciation adjustments. Because the TCJA reduces or eliminates such exclusion preferences as itemized deductions for state and local taxes, home equity loan interest deductions, and personal and dependent exemption deductions, anyone who owes the AMT under the current rules is more likely to generate AMT credits than under prior law.

Although avoiding or minimizing the AMT is a worthy tax-planning goal, don’t shoot yourself in the foot. For example, postponing the exercise of an ISO could turn out to be a bad idea if the stock price plummets. Your tax advisor can help you identify the most beneficial moves and avoid costly mistakes.

Do you have questions about reducing your AMT exposure? Pease contact your ALL tax advisor or call us at 617-738-5200.

Real estate companies, like companies in most other business sectors, have struggled to maintain operations and drive revenues during the coronavirus (COVID-19) pandemic. Thankfully, the $2.2 trillion Coronavirus Aid, Relief, and Economic Security Act (CARES Act) contains changes to the 2017 Tax Cuts and Jobs Act (TCJA). Those changes, along with tax law changes and loan programs under the CARES Act, provide potential relief to companies in the real estate industry.